It was unseasonably warm for December. Had it been an evening flanked by bitter winds or numbing cold, I could have dismissed my goosebumps and trembling hands as par for the course, but, as I sat in the back of a cab headed uptown, I saw them for what they were. I was terrified.

Back at our apartment, Cameron was waiting for me to arrive. I steadied myself and took out my phone: “It’s happening,” I texted a friend. “He’s going to propose tonight.” Considered out of context it was a message that seemed to invite a celebratory response. This friend, however, knew me better than that. “How are you holding up?” she wrote back.

Growing up, my cousin had a board game called Perfect Wedding. Aside from its eponymous objective, the gameplay details are mostly lost to me, though I can still recall the colorful plastic rings meant to be worn by each player. What I remember most clearly is my reluctance to join in when my cousin pulled the game out from her closet. A few years later, I received a Special Edition Wedding Barbie set for Christmas, the bride herself packaged alongside a ring bearer and flower girl, no groom. Swathed in layers of stiff white tulle, she was, I imagined, reticent and somewhat bland, needing to be coaxed out of her shell by her girlfriends. They were the ones sheathed in neon cow print mini-dresses and iridescent ballgowns.

Marriage was a concept that seemed curiously inevitable to my younger self, albeit far enough into the future that I could focus on things that mattered, like piecing together the perfect mixtape or convincing my mother to buy me an inflatable chair. The idea of dating—like allowances, talking back, sleepovers, and gifts given on Easter—made both my immigrant parents crinkle their noses in disgust: yet another American-made distraction designed to waylay young people with promise. Other kids could do that sort of thing; we had doctorate degrees to pursue.

Perhaps unsurprisingly, I stumbled blindly into my first serious relationship at the age of eighteen. Cameron and I lived across the hall from each other in our freshman dorm. He seemed kind and endearingly nerdy; I thought we’d make great friends. The first time he reached for my hand and held it, I truly believed he was expressing his desire for platonic friendship in his own earnest way. The ensuing kiss caught me completely off-guard.

We molded ourselves to fit like puzzle pieces before learning that it would behoove us to craft identities that needn’t rely on each other to exist.

Over the next seven years, we took on the oftentimes grueling tasks of learning how to love and how to live. We shed versions of ourselves and tried on new personas, at first molding ourselves to fit like puzzle pieces before learning that it would behoove us to craft identities that needn’t rely on each other to exist. We clashed and compromised, tore down blueprints and started from scratch, retreated into a cocoon of our own making and emerged a bit wiser, a bit surer of our steps as we trekked towards adulthood. I had no doubts about a future together, yet the notion of his impending proposal sent me into a panic.

I breathed deeply, trying to buy myself some time. I was on the phone, catching up with a woman from my hometown; in light of our shared history, she was the sort of person I’d unthinkingly referred to as a friend for years—until, suddenly and irreversibly, I realized a vast chasm had opened between us.

Her wedding questions were incessant. I realized it would be easier to come clean rather than bat them away one by one. “We’re actually holding off on wedding stuff for a while,” I began. “I needed some time to, I don’t know, wrap my head around everything.”

The person on the other end switched to a hushed tone of condolence.

“We’re still together,” I clarified, “And everything is fine. I just needed some time.”

It felt as if the front doors had been flung open on our carefully crafted inner lives, friends, family, acquaintances, and strangers rushing in to pore over every detail and offer unsolicited opinions.

I was twenty-five the night Cameron proposed, and within hours, the sheer velocity with which the world had rushed to weigh in on the event left me depleted. It felt as if the front doors of our carefully crafted inner lives had been flung open. News travels faster than I’d imagined, and friends, family, acquaintances, and strangers inserted themselves in our story to pore over every detail and offer unsolicited opinions. Some reached out to share well-wishes; others wondered why they’d had to learn about it through the grapevine.

There were questions that had no answers, invasive exhortations to bear children early and often, requests to recite the story of how it happened, demands to see the ring.

The ring. I hadn’t wanted one, but an assortment of well-meaning loved ones had assured Cameron that this was a ruse, a coy fake out. He’d never seen me wear any gems or stones, so he found an artisan to etch my initials—mine, not his or ours because he wanted me to know that his proposal wasn’t an invitation to sublimate my selfhood—into a gold band. I really hadn’t wanted a ring, but at least this one came with a story; rich in subtext, it didn’t need a narrative about carat weight and cut.

Meanwhile, I was still struggling to find my footing—in my career, my finances, my quest for wellness. I told Cameron I wanted some time to continue fleshing out my identity before tackling marriage. I didn’t know how long it would take, but five years, when I’d be thirty, seemed like a nice round number to shoot for.

“So you’re not even looking for dresses or anything?” the voice on the line asked.

I had five years to find myself, and it was a responsibility I didn’t take lightly. I traveled, launched a business, reevaluated relationships. I sought therapy after a decade of suffering from depression.

I was racing to achieve milestones under the false assumption that marriage would forcibly impede further progress.

For the first time, I was learning not only to examine the ways in which I’d come to exist in my current state, but to reconsider and challenge those outcomes. And so, naturally, it was in my therapist’s office that I realized I wasn’t really finding myself: I was unwittingly working my way down an extensive to-do list with a looming deadline. Maybe it was the subconscious effect of so many childhood stories ending with a wedding and a vague “happily ever after.” Maybe it was my all-too-conscious recognition of the ways in which marriage limited and delayed my own mother’s prospects for self-actualization. Either way, I was racing to achieve milestones under the false assumption that marriage would forcibly impede further progress. I felt a vise grip of anxiety melt away. Not long afterward, we set a date.

When the pressure of how things ought to be creeps in, I try to remember that joy should be the foundation of these proceedings. Protocol is optional.

Of course, working on one’s self is just that and that alone. My fiancé and I have the same family and many of the same friends we had four years ago, and, at time, their well-meaning inquiries and suggestions still leave me feeling vulnerable and exposed. That said, I love to eat and dance and laugh and spend time with loved ones while looking great, and at the end of the day, that’s what a wedding entails. When the pressure of how things ought to be creeps in, I try to remember that joy should be the foundation of these proceedings. Protocol is optional.

Much like our first seven, these last five years with Cameron have been wonderful and difficult and confusing and illuminating. We’re still figuring each other and ourselves out, though I’m now fairly certain that this process will be ongoing. Though that prospect used to worry me—what if the wrong iteration of me marched into marriage and fouled it up?—it now excites me. When I consider our combined capacity for love, growth, and change, it’s clear that the possibilities are endless. And that’s a very good thing. 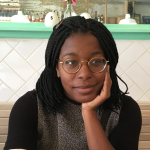 Roxanne is a writer living in New York City. She might just make it after all.

One response to “The Five-Year Engagement”